For a while now, there has been a somewhat divide between two sectors of the BJJ community, with each one claiming their method of performing BJJ is the superior option.

In this article, we’re going to be taking a look at said debate, analysing the key differences between the two and discuss which one is worth doing (spoiler alert…. Do both).

But, before we get into this, I want to direct you over to this post written by John Danaher, one of the most respected minds and coaches in modern day BJJ (reposted by BJJEE).

While I’ll do my best to dissect this debate from my own point of view, you can’t go wrong by giving that article a read… so do it!

The Big Question: Is the Gi Unrealistic?

The main sticking point in this whole thing is whether or not the Gi provides an unrealistic fighting simulation.

I get the point…

How many people do you see casually walking down the street rocking a kimono?

Not many I bet, but who knows, they could come into fashion, right?

Anyway, in my opinion, the Gi is probably going to be more realistic than a rash guard and spats. It’s equally as rare to see someone walking down the street, head to toe in spandex.

However, the chances are that someone’s going to be wearing a jacket, or a jumper or even a blazer of some kind, which is somewhat like a gi. This in my opinion, make the gi just as, if not more realistic than training in a rash guard.

Plus, the Kimono, which was was created in Japan, was designed to replicate the garments of clothing worn during that period of time. This means that the sole purpose of the gi, is to literally represent clothing in hand to hand combat situations.

The only caveat to this is, if you’re training BJJ for MMA, in which case, yeah, rash guard and shorts for sure.

I get it, reading isn't to everyone's taste, so I've found this pretty great video by Chewjitsu, where he discusses whether or not a beginner should do Gi or No Gi BJJ.

Check it out below:

Also, check out the rest of his channel. Some absolute golden nuggets of information in there.

What are the Main Differences?

Ok, now that’s out of the way, let’s take a closer look at the differences between these two version of BJJ.

First, and most obviously, is the attire worn when training and competing.

Traditional BJJ is performed when wearing a GI, which is an outfit comprised on three elements - the Kimono (jacket), pants and a belt that represents your current rank in BJJ.

No-Gi BJJ is performed when wearing tight garments of clothing, typically a rash guard and spats or shorts, depending on the practitioners preference.

As you'd expect, a BJJ Gi provides a lot more material to hold onto, where as No-Gi requires a more wrestling-esque grip to be established onto your opponents limbs and neck, which of course, is easier to break.

In terms of training and participating in No-Gi BJJ, there a few key differences that you'll find.

If you read the Danaher post I mentioned earlier, you'll see that he summed this up very well.

Take off the gi and you lose 3 main factors - friction, less a & weaker grips and the ability to perform gi based chokes.

The absence of friction tends to speed things up a bit, as you're able to wriggle and slide around your opponent much easier than when wearing a gi, especially given the texture of typical BJJ rash guards.

Again, without access material to establish a grip on, a No-Gi BJJ practitioner must rely on gripping their opponents limb, and utilising proper body positioning in order to control their opponent. This is something that is less prominent in traditional Gi wearing BJJ, when you can somewhat rely on holding firmly onto your opponents Gi, using grip strength to maintain your position.

Finally, with the absence of the lapel/ collar, No-Gi BJJ practitioners are forced to widen their arsenal of submissions, often heading southward for leg and ankle locks - something not typically allowed in IBJJF Gi competitions, more on that later.

While the rule set of a competition will change depending on the governing body, most modern day BJJ tournaments will sanctioned by the IBJJF (International Brazilian Jiu Jitsu Federation).

One of the key differences between Gi and No-Gi ruleset is that heel locks are not permitted in IBJJF Gi competitions.

With that in mind, they are in fact allowed in the ADCC, which is one of the largest No-Gi competitions in the world.

Benefits and Drawbacks of the Gi

One of the main benefits of Gi training, in the early stages of your development, is the defensive mind-set you're forced to adopt, especially when it comes to exposing a neck. Due to the sheer volume of potential Gi based chokes, and how close the lapels are to the neck, keeping your chin tucked defensively is one of the first things you learn.

This can then translate very well to No-GI BJJ, where rear naked, guillotine and darce chokes are very common submissions.

One of the main drawbacks of Gi training is that it can instil bad habits in terms of body position. Whilst wearing a gi, you can somewhat 'hold on for dear life', by establishing a strong grip on your opponents Gi and using strength to set up the submission.

This on the other hand, isn't possible in No-Gi, with BJJ practitioners often finding their favourite submissions to be near impossible without the firm grip of the Gi.

This in turn forces players to better improve their positioning, and leverage their weight and and position in order to better set up the submission.

Which One is Right for You?

To be honest, there really is no right or wrong here, it's completely down to personal preference.

However, that said. When you look at some of the most accomplished BJJ practitioners, they're adept in both variations of BJJ.

By training in both, there's no denying that you'll become a far more well rounded and knowledgeable BJJ practitioner. As you continue to both Gi and No-Gi BJJ, you'll learn the nuances of both variations, in which will contribute to you overall skill set in this beautiful art.

Well there we have it, hopefully I've done an alright job at discussing the two version of BJJ.

If you've got any questions what so ever or even any opinions of your own, feel free to drop a comment in the section below. 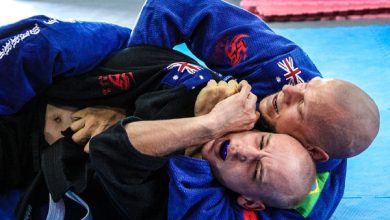